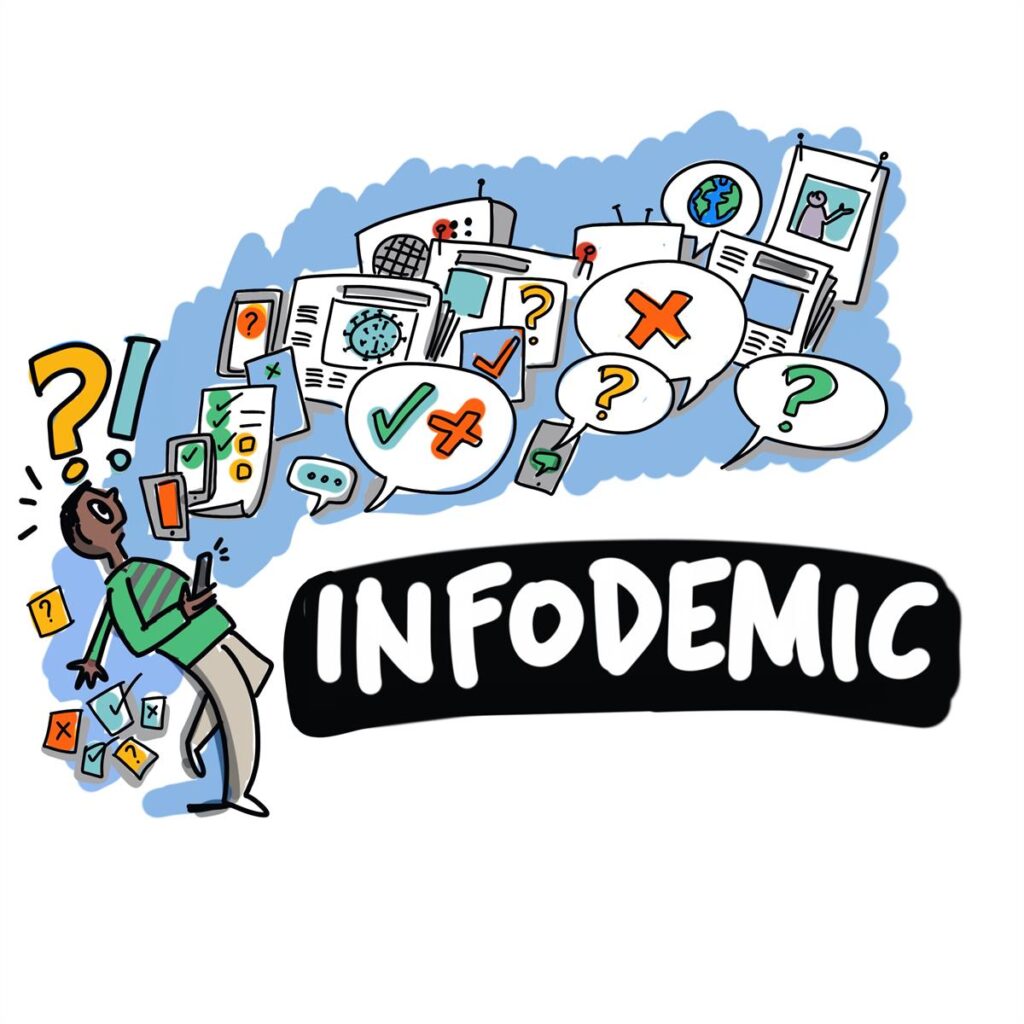 How to combat an infodemic with medical writing? If the past few years have taught us anything, it’s that misinformation can spread as fast as any virus. The widespread dissemination of false information, dubbed the “infodemic,” was and is a major source of frustration for public health officials desperate to mitigate the impact of COVID-19. It has undoubtedly caused unnecessary deaths and likely prolonged the pandemic. Hence, combatting the infodemic is crucial. As a medical writer, you should try to combat infodemic by your writings. Here, I am going to discuss how to combat an infodemic with medical writing.

It takes a concerted effort from all parties involved to fight misinformation, and medical communicators acting in good faith play a significant role in this effort.

The term “infodemic” refers to the rapid spread of true or false information. A more accurate term for the current infodemic is “disinformation infodemic.” Regardless, the word was first used in 2003 during the 2002-2004 SARS outbreak. It resurfaced in force at the beginning of 2020, as COVID-19 was establishing itself worldwide. It is high time for the world for combatting the infodemic. We will explain how to combat an infodemic with medical writing in the discussion below.

Misinformation about health sciences has caused harm throughout history, but perhaps the first true electronically-spread infodemic was the MMR vaccine scare that began in the late ’90s. In 1998, Andrew Wakefield and fellow researchers published a paper explaining the supposed harms caused by the mumps, measles, and rubella (MMR) vaccine in the Lancet­, one of the most prestigious journals in medicine.

Wakefield and his colleagues shared findings from 12 patients who identified as autistic shortly after taking the MMR vaccine, claiming that the shot “gave them autism.” The paper was met immediately with near-universal criticism, panned by other experts in the field for its tiny sample size (n=12), sloppy statistical analysis, and inappropriately sweeping claims based on scant evidence. Shortly thereafter, it was revealed that Wakefield failed to disclose that his research was paid for by lawyers representing parents suing drugmakers over vaccine-related injuries; a clear conflict of interest.

Despite the swiftness of the response from other researchers, the Lancet was slow to retract the article, only completely removing it in 2010. By then, the damage was already done. A series of celebrities opposing the MMR vaccine drummed up a wave of concerned parents spreading false information about the vaccine through email and message boards. Measles declared eliminated in the U.S. as of 2000, surged back into prominence, with over 2,200 cases reported from 2000-2018.

Although vaccine hesitancy exacerbated by the Wakefield debacle played an outsized role in misinformation during the second act of the pandemic, the current infodemic began as soon as the first breakout in Wuhan, China. According to critics of China’s government, information about the pandemic was actively suppressed from the beginning to early 2020, with posts about the death of an early COVID-19 whistleblower, Dr. Li Wenliang, being pulled from social media platforms like WeChat. At that moment it was very crucial for combatting the infodemic and stop the misinformation from spreading so fast. But how to combat an infodemic with medical writing?

Once the virus spread across the world, misinformation followed, flourishing in the uncertainty of “unprecedented times.” As the pandemic continued past the first “flatten the curve” lockdowns, the breadth and variety of misinformation surged alongside new cases.

People began trying unorthodox “treatments” ranging from disinfectants to antimalaria drugs. Many claimed that wearing surgical masks was bad for their health due to CO2 buildup while simultaneously claiming the masks couldn’t stop much larger viral particles and aerosols. A common belief spread that the virus was no worse than the flu or that the whole situation was a false flag or a fake tragedy staged by authorities to manipulate the public. To avoid these types of situations, you need to know how to combat an infodemic with medical writing. It will help you keep people aware of this misinformation and stop it from spreading.

The situation was made worse when the vaccines began testing. Many were wary at first due to the newness of the technology or historical medical abuses against marginalized people. However, a much more prominent and less warranted source of skepticism was rampant misinformation spread through highly polarized political discourse. Many believed that the shots included microchips or fetal components. Others thought that the mere presence of a vaccinated person could disrupt the menstrual cycle of bystanders.

These sometimes-preposterous claims led to vaccine hesitancy that was notably divided amongst party lines. An analysis from May 2022 found that almost a third of the nearly 1 million COVID deaths at the time could’ve been prevented if the victims were vaccinated. Unfortunately, this has translated to much higher COVID death rates in counties that voted for politically conservative candidates in the 2020 U.S. presidential election.

Contributing Factors to the Infodemic

The staggering amount of needless death caused by false information has irreparably changed the lives of countless families. Therefore, it is worth examining the causative factors to stem the tide of the current misinformation outbreak and hopefully prevent the next one. Before learning how to combat an infodemic with medical writing, we need to know how an infodemic spreads.

Basic human nature is a key culprit behind the wave of false health information during the COVID-19 pandemic. Humans are pattern-seeking animals that piece together potentially unrelated information to form a clear, defined picture of the world around us. Science itself is an expression of this urge to demystify. In a new, world-upending situation like a global pandemic, peoples’ deep unease of the unknown played off the understandable desire not to die, making unfounded claims a near certainty.

Social media deeply exacerbated the problem, passively and actively. Throughout the 2020 U.S. election cycle, known sources of misinformation got six times the engagement of traditional news sources on Facebook, despite fact-checking efforts. Although the social media platform claimed ignorance of the scope of the issue, a whistleblower revealed that the company was studying the issue. They claimed the platform was aware their algorithm elevated hate speech and misinformation—it was a feature, not a bug. Other platforms like Twitter were also breeding grounds for false information.

How to Combat an Infodemic with Medical Writing Considering Four Key Things?

Medical writers play a key role in fighting misinformation because they act as a conduit between medical researchers and the general public. However, simply conveying accurate information isn’t enough—the information needs to be engaging and accessible. You should consider four key things while you are going to learn how to combat an Infodemic with medical writing.

For example, a well-written book on a medical topic can reach a wide, dedicated audience, but the length will put off many in the lay public. People have short attention spans and errands to run; they need something they can skim in the checkout line. That said, many people prefer something in the middle, a longer-form piece that won’t burn their entire lunch break. As such, medical writers must keep brevity in mind for combatting the infodemic.

Another key consideration is the format. Many readers do prefer longer, narrative pieces. Others, however, may prefer formats that are easier to follow when one’s attention is divided, such as listicles or a Twitter thread. Likewise, the writing must be approachable and easy to read to a lay audience. Care must be taken to avoid patronizing the audience, however, as few appreciate being talked down to.

People won’t read what doesn’t appear in their feed. Headlines and articles need to be crafted with search engine optimization (SEO) in mind. In addition, articles should be paired with thumbnails that draw attention and get clicks. Most importantly, anti-infodemic articles need to be shared in the same channels as misinformation, but louder. Flooding social media platforms like Facebook, Twitter, and Telegram will be pivotal in slowing the flow of false information to vulnerable audiences

4. Don’t Become Part of the Problem

Perhaps the most important thing to keep in mind when combatting the infodemic is to check one’s sources! Without careful consideration, well-intentioned content creators can become a source of misinformation themselves. Every article should be cross-checked by someone who can give useful feedback to ensure the article doesn’t hurt the author’s credibility. In addition, writers should be careful about sharing preliminary results, as the public tends to distrust those who share conflicting information. In general, the role writers can play in combatting the infodemic is massive.

Why do Medical Writers need to Combat an Infodemic?

Medical writers are uniquely suited for the task due to the skillset required for the job. We spend years in formal training in related fields, giving us expert insights into the topics we write on and a keen eye for unreliable sources. In addition, competent medical writers can produce content in a variety of formats, with an eye for SEO. Medical writers produce written content for various audiences and can adapt their style and tone accordingly.

Our team at The Med Writers comes from all over the health sciences landscape, ensuring that what we write comes from expertise. Everything we write runs past several sets of eyes before going to the customer, to avoid spreading false or misleading information. We also have SEO and social media professionals on board to maximize the reach of our work. Contact us today to find out how we can support your efforts to combat misinformation and stem the tide of the infodemic.